Richard (Rick) Perales grew up in Tucson, Arizona.  He was stationed at various Air Force Bases before coming to Beavercreek, Ohio in 1997.  Rick retired from the United Sates Air Force in 1997 with his military career culminating as Commander of the 788th Civil Engineer Squadron at Wright-Patterson Air Force Base.

He served as the Mayor of the City of Beavercreek from 2002-2003 and as a member of Beavercreek City Council in 2004.  He served two terms as a Greene County Commissioner from 2005 to 2013; and served four terms in the Ohio House of Representatives, 73rd District.

Rick earned a Bachelor of Science degree in Building Science Construction from Auburn University in 1982.  He earned his Master of Science Degree in International Relations from Troy State University. 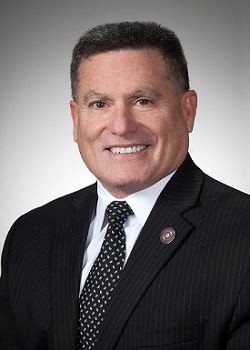 He and his wife, Becka, reside in Beavercreek and have four children and seven grandchildren.

As a Civil Engineer in the Air Force, Rick spent 15 years in various positions dealing with comprehensive master planning of installations, programming, engineering and construction of facilities, as well as the operations, maintenance and repair of facilities on various Air Force Bases.  He was stationed in Saudi Arabia, Egypt, Germany, and various bases stateside.

After retiring from the Air Force, Rick was the Washington D.C. Division Manager for CAD CAM, Inc., a computer-engineering firm.  In 1998, he came to the University of Dayton as the University’s Executive Director for Facilities Management.  In this position, he oversaw the design and construction, and operation and maintenance of the campus’ physical assets and led the unprecedented campus expansion and revival from 1998 to 2013.

Rick was named one of the Dayton Region’s Top 25 Most Influential People of the Decade in 2009 and inducted into the Ohio Veterans Hall of Fame in 2010.  He was awarded the AmVet Legislator of the Year in 2014; the Wick Wright Award for outstanding support to the National Aviation Heritage Alliance in 2015; a Dayton Business Journal 2016 Veteran of Influence; and the American Legion Legislator of 2018.  Rick was also awarded the Ohio Aviation Association Legislator of the Year for both 2019 and 2020.