After reviewing all submissions received from the Design Professional Request for Qualifications, the Jail Project Committee voted Wachtel & McAnally as the leading choice.  A formal proposal was requested from W&M and is expected by 4/22/22.

Two organizations responded to the Construction Manager at Risk Request for Qualifications and formal Requests for Proposals were requested from each.  On-site pre-proposal meetings were held this week to discuss the project and review the potential site.  Final questions to the RFP are due on 4/19 by 3pm and final proposals are due on 4/22/22 by 3pm.

10/21/2021 Update: AT THE REGULARLY SCHEDULED GREENE COUNTY BOARD OF COMMISSIONERS' MEETING, THE COMMISSIONERS PASSED A RESOLUTION OF INTENT TO REDUCE COLLECTION OF 0.25 PERCENT SALES AND USE TAX FOR THE PURPOSE OF SUPPORTING CRIMINAL AND ADMINISTRATIVE JUSTICE SERVICES, SPECIFICALLY FOR THE PURPOSE OF CONSTRUCTING, ACQUIRING, EQUIPPING, OR REPAIRING A DETENTION FACILITY IN THE COUNTY, IF APPROVED BY VOTERS AT THE NOVEMBER 2021 ELECTION ONCE ADEQUATE MONEY IS AVAILABLE IN THE FUND TO DEFEASE THE BONDS FOR THE PROJECT.

The County’s current 146-bed downtown jail is 52 years old and obsolete and under a Federal Consent Decree limiting capacity regardless of the number of individuals ordered into custody by the Courts. This has resulted in the Sheriff being forced to release sentenced individuals, a practice that would end with a new facility. The County’s Adult Detention Center just outside downtown Xenia on Greene Way Boulevard was built in 2000 with a capacity of 236 beds. Both combined, the County’s jail system has the capacity to house a total of 382.

In 2018, the County Commissioners published an RFQ for a Jail Needs Assessment Consultant and chose the firm HDR. The HDR analysis showed that Greene County criminal justice system is a well-functioning and efficient system that focuses on inmate outcomes, not just containment. Community based organizations have an integral role within the system and provide behavioral health services and are important components to the system’s outcomes focus.

The end result of the Needs Assessment analysis indicated the County should abandon the current jail building. It presents numerous safety concerns and lacks sufficient areas to conduct critical operational functions and programs. Put simply, it does not contain the space required for current housing capacity nor the design required to accomplish modern correctional goals.

The County placed a sales tax initiative for a new jail and Sheriff’s administration facility on the ballot in Spring of 2020. At the time the Country was entering the state of emergency for the COVID-19 pandemic. The normal election process was upended and it was a time when people were fearful and anxious. The measure was defeated.

While there may be several factors to the measure not passing, three common objections were identified:

The County listened to feedback from the community and has reduced the planned facility to 384 beds. The County also intends to publicize more facts about the proposed sales tax initiative as well as discuss the rehabilitation, mental health, and substance abuse services planned for the new facility.

The need for this new facility only grows. To help get facts about this worthy project out to voters before the November election, we are enlisting help from community partners willing to share the information in this packet.

We hope you will consider being one of those partners and sincerely thank you for your help.

• The new facility will replace the downtown jail, ADC, and Sheriff’s Administration Offices, and Coroner’s Office

• The new jail and office square footage will be approximately 150,000 square feet

• The new jail will have 384 permanent beds with space for flexibility, treatment, etc.

• Essential purchases such as grocery food, utilities, gasoline and prescriptions are NOT taxed

• Our surrounding counties are all at, or above, 7% sales tax

• Levy funds can be used only for construction, acquisition, equipping and repairing a detention facility

Why do we need a new jail?

The County’s current 146-bed downtown jail was built in 1969 and has been in constant 24/7 use for 52 years. The building presents major repair and upkeep costs with daily obstacles to the well-being and safety of the people it houses and the employees that work there. It is obsolete and unable to meet the needs and goals of a modern correctional facility.

How large is the proposed new jail?

The proposed new facility will accommodate 384 permanent beds. It will replace the downtown jail and the Adult Detention Center which currently house a total of 382 beds. The facility will be designed with the goal of containing “better beds” in a safe building that incorporates the effective correctional designs of an effective and modern facility. Though less overall total square footage than the current Jail, ADC and administrative offices (~300K sqft currently vs ~150K sqft in the proposed facility) the new space would contain much greater flexibility of use, consolidation of operations, both of which result in economies of scale.

Wouldn’t our tax dollars be better invested in other community services?

This investment will ultimately help reduce recidivism and keep our community safer. Greene County officials are committed to being good stewards of taxpayer dollars. The investment in a modern facility helps us serve many of our region’s most vulnerable citizens by allowing the County to better address the critical mental health and medical needs of the individuals in custody.

Where would the new facility be built?

Preliminary plans are to construct the proposed facility on the land adjacent to the current Adult Detention Center on Greene Way Boulevard just outside downtown Xenia.

Will the new facility replace only the downtown jail?

How much will the facility cost?

A $53M estimate was included in the original Jail Needs Assessment performed in 2019 for construction of a 384-bed facility. Costs for materials and labor have increased sharply since that time and project costs will largely be driven by then current interest rates and final design.

How will the project be financed?

The County is placing Issue 1 on the November 2021 ballot that requests voter approval of a 0.25% temporary increase to sales tax. Once the final facility design is determined, the County would borrow funds to cover that estimated cost through a bond at the then-current interest rate and match the bond’s terms to be covered by sales tax collections. If tax revenue exceeds expectations the bond would be paid off early and sales tax would revert back to the current 6.75%.

How would this sales tax increase change the cost of my purchases?

This increase is for one-quarter of one-percent or 0.25%. For example, only 25 cents more for a $100 purchase. Purchases up to $398 would change by less than one dollar. The cost for many essential purchases would not change at all, as they are not subject to sales tax. Things like grocery food, utilities and fuel including gasoline, prescription medicine, medical services and devices, would all continue to be sales tax-free.

How much would our sales tax be when Issue 1 passes?

7% - which is less than the average county sales tax across the entire State of Ohio. Nearly 80% of all counties in the State of Ohio pay 7% or higher sales tax. All counties around Greene County have at least 7% sales tax, with Montgomery County being the highest at 7.50%.

Why a sales tax increase?

We did not want to raise property taxes for Greene County property owners. With a sales tax, people from outside our County who come here to make purchases help us pay for this facility. Shoppers that come to The Greene Towne Center, the Beavercreek Mall at Fairfield Commons, Cornerstone Shopping Center, around WPAFB, and all the many local businesses in our cities and villages, help contribute to the cost of our facility by estimates of as much as 40%. Which seems fair because typically over 40% of the individuals housed in our jail do not live in Greene County.

What else will be purchased with dollars from this sales tax increase?

Ohio Revised Code (Section 5739.021) clearly states the funds can be used only for the construction, acquisition, equipping or repair of a detention facility in the County. Once the facility debt is paid off, the bond would be satisfied and action would be taken to revert sales tax back to the current 6.75%.

Why wouldn’t we spend the money rehabilitating people instead of building a new jail?

Municipal Judges and Common Pleas Judges within our County order the Sheriff to take certain individuals into custody. It is not within the Sheriff’s authority to try to rehabilitate a person instead of keeping them in jail. But if the jail is designed properly, services such as substance abuse treatment and rehabilitation can be provided while that person is there, improving their chance of recovery during incarceration to help avoid repeat offenses.

Why can’t details be shared now about treatment programs to be provided in the new jail?

Medicaid, Medicare and most health insurance plans do not cover services while incarcerated. The majority of funding for mental health and substance abuse programs comes from State and Federal sources. Dollars from the proposed sales tax initiative cannot be spent on programs or operations. Without a facility in which to conduct those programs, we are unable to apply for related grants and funding. Existing programs from community partners such as TCN Behavioral Health, the Mental Health Recovery Board, the GreeneLeaf Residential Treatment Program, and other emerging community partners could be expanded to be more effectively provided given the proper facility space and design. While discussions are being conducted now with additional potential program providers, only once funding for this new facility is approved can solid plans be developed. 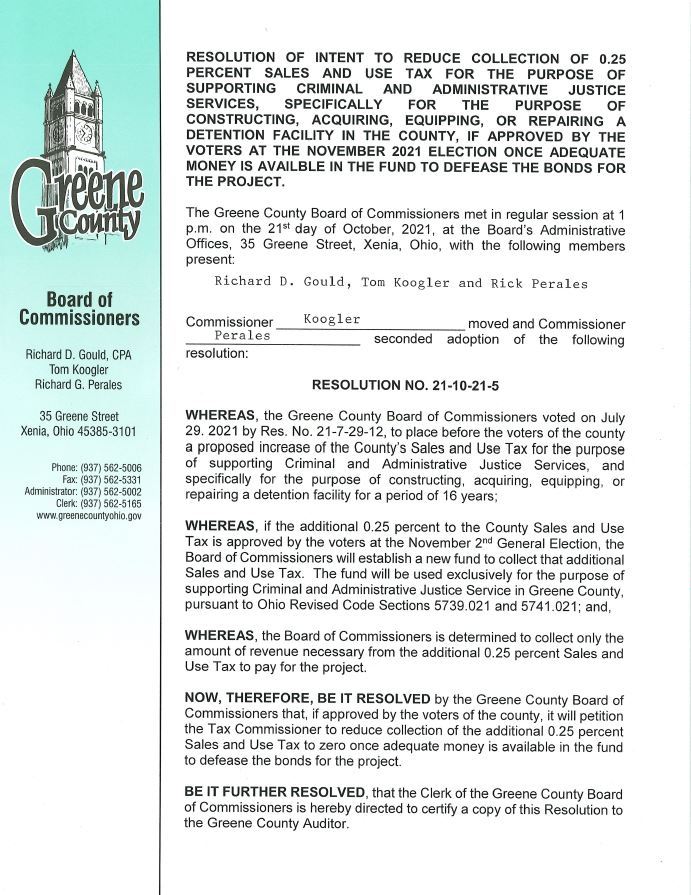 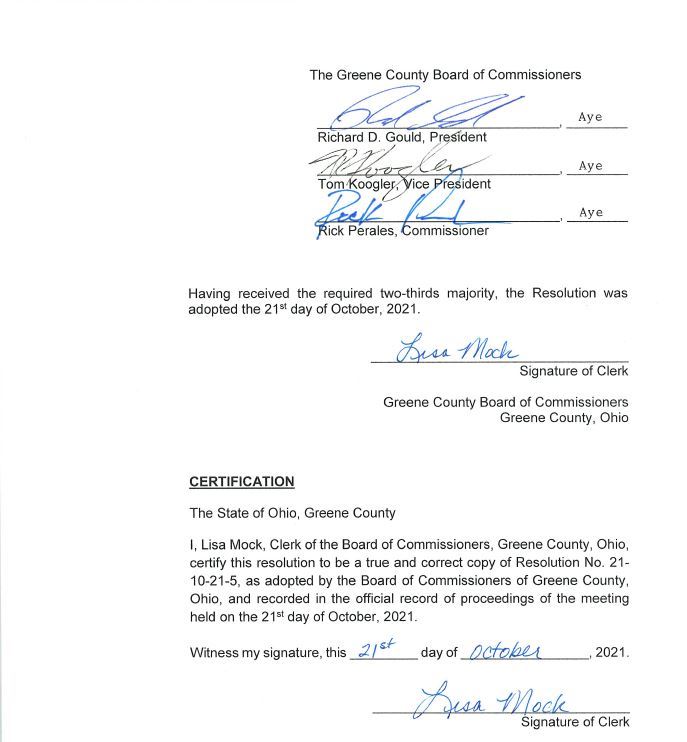 Temporary Sales Tax Increase? What will it cost me?

Sales Tax in Greene County is currently 6.75% and applies to many purchases and services. What happens if that number goes to 7%?

The cost for many purchases would not change at all. Essential items such as grocery food, utilities, gasoline, and prescriptions are NOT TAXED

All surrounding Counties have 7% or higher sales tax already:

Many people come to our County and make purchases – at The Greene, The Mall at Fairfield Commons, and CornerStone, plus our many local businesses. With sales tax, those visiting shoppers will help us pay for this new facility – with an estimate of up to 40% coming from visitors that live outside Greene County.

This change would only be in effect long enough to cover the costs to build a new Greene County Correctional facility then sales tax would revert back to 6.75%.

Greene County Board of Commissioners