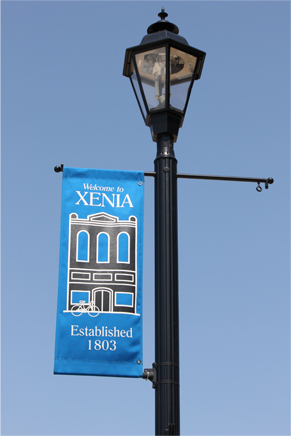 Xenia, Ohio is centrally located in the "transportation triangle" formed by three major interstate highways I-70, I-71, and I-75. These major arteries are within minutes of Xenia via U.S. 35, U.S. 42, and U.S. 68. Because transportation and healthy economies go hand-in-hand, the convenient and accessible movement of people and products is a major asset for Xenia.

Companies using corporate aircraft will also enjoy the convenience of the Greene County - Lewis A. Jackson Regional Airport just west of Xenia, as well as the nearby Dayton International Airport, which reaches over two-thirds of the nation’s people and businesses.

Xenia's location offers easy access to the cultural amenities of three major metropolitan areas while retaining the traditions and atmosphere of a small Midwestern town. Rich in traditional values, Xenia blends the preservation of its heritage with a progressive attitude.

With a population over 25,000, Xenia is friendly, people/family oriented, and known for its hospitality. As the county seat, the city is strategically located between Greene County's suburban western areas and the rural areas to the east.

Xenia's safety divisions have earned a reputation for excellence in both planning and operations. The Police Division has received International Accreditation from the Commission on Accreditation of Law Enforcement Agencies (CALEA). The efforts of the Fire Division and the Water Department have earned the City a Class 4 fire insurance rating, which results in lower insurance premiums for residents, businesses, and industry.
EMPLOYMENT
ONLINE PAYMENT
GIS/MAPS
PARKS & TRAILS
BIDS
VISITORS
Home
Notify Me®
Comments
Facebook
Twitter
Instagram
Government Websites by CivicPlus®
[]