Richard (Dick) Gould is a lifetime resident of the Dayton area.  Dick is a certified public accountant and was elected as a Greene County Commissioner in 2018 for a four-year term beginning January 2019. 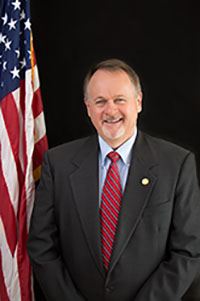 Later, Dick became a real estate broker while maintaining a small tax accounting practice.  He opened a nationally franchised real estate brokerage where he supervised eight agents.  As an award-winning broker, he sold both residential and commercial properties and became known as a short-sale specialist during the foreclosure crisis.

He was appointed to fill an unexpired term of Greene County Treasurer in January, 2011.  Wanting to devote his full attention to the office, Dick closed his brokerage after taking office.  He was subsequently elected to multiple terms, serving a total of eight years.  As Treasurer, he oversaw the collection of tax revenue in excess of $275 million and total receipts of nearly $700 million.  He also managed an investment portfolio of over $130 million for the County.  He has served on numerous County committees including the Budget Commission, Debt Committee, and the Board of Revision.  Additionally, he has served on numerous statewide committees with the County Treasurers Association of Ohio.

Dick was re-elected in 2022 to his second term as a Greene County Commissioner.

Believing in community service, Dick is very active in the community.  He is a member of the Board of Directors and the Finance Committee of the Greater Dayton YMCA.  He is a past president of both the Fairborn and Beavercreek Rotary Clubs and he is an active member of the Chambers of Commerce of Beavercreek, Fairborn, and Xenia. Additionally, he serves on the County Regional Planning and Coordinating Commission and has become very active with the Dayton Development Coalition.